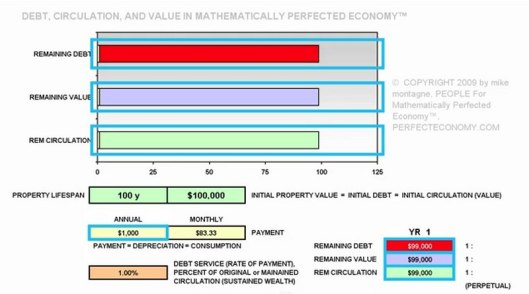 What is Mathematically Perfected Economy

Mathematically perfected economy is a currency not subject to interest, comprising a debt financing all permissible enterprise, paid by each and every debtor exactly as they consume of the associated production.

There is no inflation or deflation, as the currency in circulation is always equal to the current value of existent production across however much of the economy is supported by a circulation.

Neither the value of money or assets are altered by changing proportions of circulation to indebted assets or services. The value of the money is always consistent in quantity — both in earnability and spendability — with the remaining value of the indebted assets which exist, for which it was issued, and which constitute its immutable value.

The remaining circulation is always sufficient to pay off debt. Further production therefore is not impeded by a deficient circulation, deplenished by paying more than what circulation was introduced for to finance the production.

Neither production or consumption are impeded by imposition of extrinsic cost. In every transaction, production is traded for equal production.

So long as we make such a circulation available to production, no impediment, limitation, or inequity whatever are imposed upon production or commerce. Production and commerce are fully expedited only by a completely liquid and effectual currency.

Mathematically perfected economy is no more than a singular prescription, dissolving unjust intervention.

Banks have no poof of claim

The cost of a home